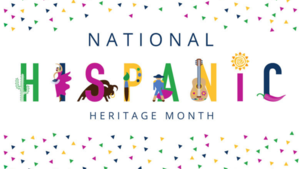 The observation started in 1968 as Hispanic Heritage Week under President Lyndon Johnson and was expanded by President Ronald Reagan in 1988 to cover a 30-day period starting on September 15 and ending on October 15. The day of September 15 is significant because it is the anniversary of independence for Latin American countries Costa Rica, El Salvador, Guatemala, Honduras and Nicaragua. In addition, Mexico and Chile celebrate their independence days on September 16 and September18, respectively. Also, Columbus Day or Día de la Raza, which is October 12, falls within this 30 day period.

The students at North Bergen will Celebrate the Hispanic Heritage month and enjoy the days of this period by attending different activities dedicated to Hispanic people. Students will engage in thematic lessons that include reading literature, project based studies, and discuss the colossal impact and influence that the Hispanic communities have put over some time in American history, culture and people. Please look at your child’s Google classroom site, school website and classroom assignments for all of the activities they are doing.

Here are some interesting facts about how the hispanic heritage has shaped our country and educational community:

May this month inspire us to commit more intently to the work of solidarity in appreciating each culture's unique contribution to the unity of our community.